LAS VEGAS, Oct. 21, 2019 /PRNewswire/ -- Pratt & Whitney, a division of United Technologies Corp. (NYSE: UTX), along with Pilatus and Honeywell, celebrated today the launch of the new PC-12 NGX aircraft, powered by the new Pratt & Whitney PT6 E-Series™ engine. It is the first turboprop engine in general aviation to offer a dual-channel integrated electronic propeller and engine control system, pushing innovation to a new level. The company is also enhancing its new Eagle Service™ Plan (ESP™) for the PT6 E-Series™ engine. 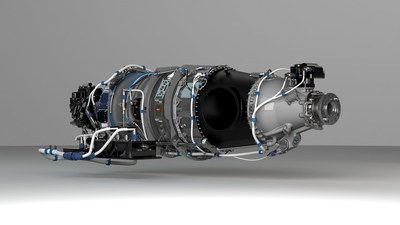 "Pratt & Whitney is very excited to be launching the new PT6 E-Series engine and to have been selected by Pilatus to power its new PC-12 NGX aircraft. We are setting a new standard for general aviation's leading engine – the PT6," said Maria Della Posta, President, Pratt & Whitney Canada. "We have injected into this new engine the knowledge that we have acquired over nearly a century of innovation and more than 1.5 billion hours of operational expertise to provide in flying and in customer service. We are proud to say that general aviation's number one engine just got even better."

Experience the difference of the new PT6 E-Series™ engine
The advanced technology behind the PT6 E-Series™ engine provides a more intuitive way of flying with simplified operations. At the push of a button, the pilot can start and stop the engine while being protected against hot and hung starts. The single lever and integrated electronic propeller and engine control system allows precise engine control by constantly monitoring temperature and torque to provide optimal engine power and performance throughout all phases of flight. In fact, the new turbine design of the PT6E-67XP engine, which powers the Pilatus PC-12 NGX aircraft, allows for quicker climb, greater speed and a 10% increase in power* to reach the destination faster.

The digital connection, putting customers a step ahead
Since the engine is digitally connected, more than 100 parameters are monitored to allow for predictive analysis of the engine and system operation and proactive maintenance planning. As the electronic engine control (EEC) receives all engine and key aircraft data, it is able to make adjustments to optimize and deliver the right engine power needed throughout the flight.

Once the aircraft lands, all the engine flight data is wirelessly downloaded**, providing operators and maintainers valuable new insights into the performance and health of the engine. This allows advanced planning of any maintenance needs, so that customers can maximize their operations and reduce their costs, flying when they need to and for longer periods. Insights gained through the new data maximizes the already high, designed-in engine availability provided by the 600 hour maintenance interval which has been increased from 300 hours, and 43% longer time between overhaul (TBO) intervals, which increases to 5,000 hours.

ESP™ for the PT6 E-Series™ engine: offers customers unmatched coverage and leading-edge data insights to maximize on wing availability
The ESP™ for the PT6 E-Series™ engine, transferrable at aircraft sale, has been designed so that owners can benefit from a reduction of at least 15% in hourly engine operating costs***. It is a step-change for customers and pilots, delivering an enhanced service level. The new ESP™ offers the most comprehensive coverage plan, including foreign object damage (FOD) repair and environmental protection. This full protection plan also includes overhaul, scheduled line maintenance, fuel nozzle refurbishment, unscheduled hot section inspection, basic unscheduled repair, accessory repair and more.

Customers who enroll in the ESP™ can benefit even more from the engine's digital connectivity. While owners, pilots and maintainers have access to the engine's performance data, the ESP™ PT6 E-Series™ takes it one step further. The data will be sent for trend monitoring and, if required, for troubleshooting. Armed with this information, Pratt & Whitney's predictive analytics team – dedicated engineers and data analysts – will provide personalized, high-tech proactive recommendations to equip customers and maintainers with new insights about their engine and the latest technical information to maximize the engine's time on wing and reduce operating costs. With no minimum flying hour thresholds and a dedicated single point of contact, the new ESP™ makes the flying experience simple all around. Customers can take advantage of the ESP™ PT6 E-Series™ plan when they purchase the aircraft through their Pilatus dealer.

About Pratt & Whitney
Pratt & Whitney is a world leader in the design, manufacture and service of aircraft and helicopter engines, and auxiliary power units. United Technologies Corp., based in Farmington, Connecticut, provides high-technology systems and services to the building and aerospace industries. To learn more about UTC, visit its website at www.utc.com, or follow the company on Twitter: @UTC. To receive Pratt & Whitney press releases and other news directly, please sign up here.

This press release contains forward-looking statements concerning future business opportunities. Actual results may differ materially from those projected as a result of certain risks and uncertainties, including but not limited to changes in levels of demand in the aerospace industry, in levels of air travel, and in the number of aircraft to be built; challenges in the design, development, production support, performance and realization of the anticipated benefits of advanced technologies; as well as other risks and uncertainties, including but not limited to those detailed from time to time in United Technologies Corp.'s Securities and Exchange Commission filings.