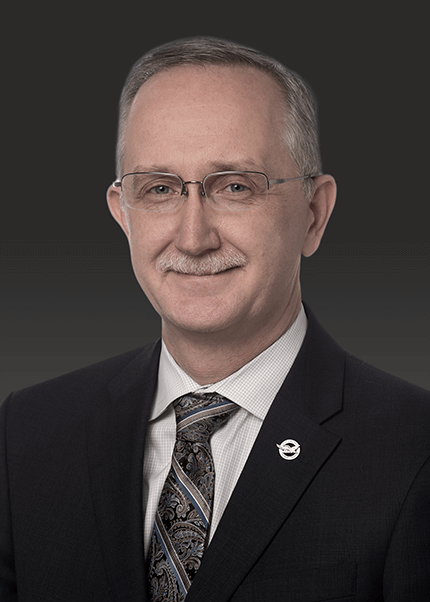 Edward Hoskin was named Vice President, Engineering, in February 2018 and is responsible for leading all Engineering activities across Pratt & Whitney Canada. Before taking up this role, he served as the Vice President, Engine Development Programs, P&WC, from 2012 to 2017 where Edward was responsible for leading the activities within P&WC’s Engineering organization as well as design, analytical and engine development for P&WC’s turbofan, turboprop, turboshaft and auxiliary power unit engines. He is also responsible for Plant 22 in Mississauga, Ontario. This facility is a major research-and-development centre for P&WC and the production centre for PW300 turbofan engines.

Mr. Hoskin joined P&WC in 1997 and held positions of increasing responsibility within Operations, Engineering Modules, Development and Project Management. Prior to assuming his current role, Edward was Vice President, Mississauga & Turbofan Programs, and responsible for the PW300, PW500 and PW600 engine programs in service, as well as program management for derivative-engine development.

Mr. Hoskin had also held the position of Director, Cold Module Centre, and was responsible for all global Engineering activities related to compression and transmission systems for P&WC’s complete product line. He was also directly responsible for the Engineering office in St. Petersburg, Russia.

In previous roles, Edward had overseen a major engine program and was responsible for delivering this new advanced engine from initial concept to production.

Prior to joining P&WC, Edward had worked in engineering and operations at Union Gas Limited.

Mr. Hoskin holds a Bachelor of Engineering Science in Mechanical Engineering from the University of Western Ontario and an MBA, with a focus on management of innovation and technology, from McMaster University in Hamilton, Ontario. Mr. Hoskin is a professional engineer in Ontario and a Design Approval Appointee for Transport Canada.