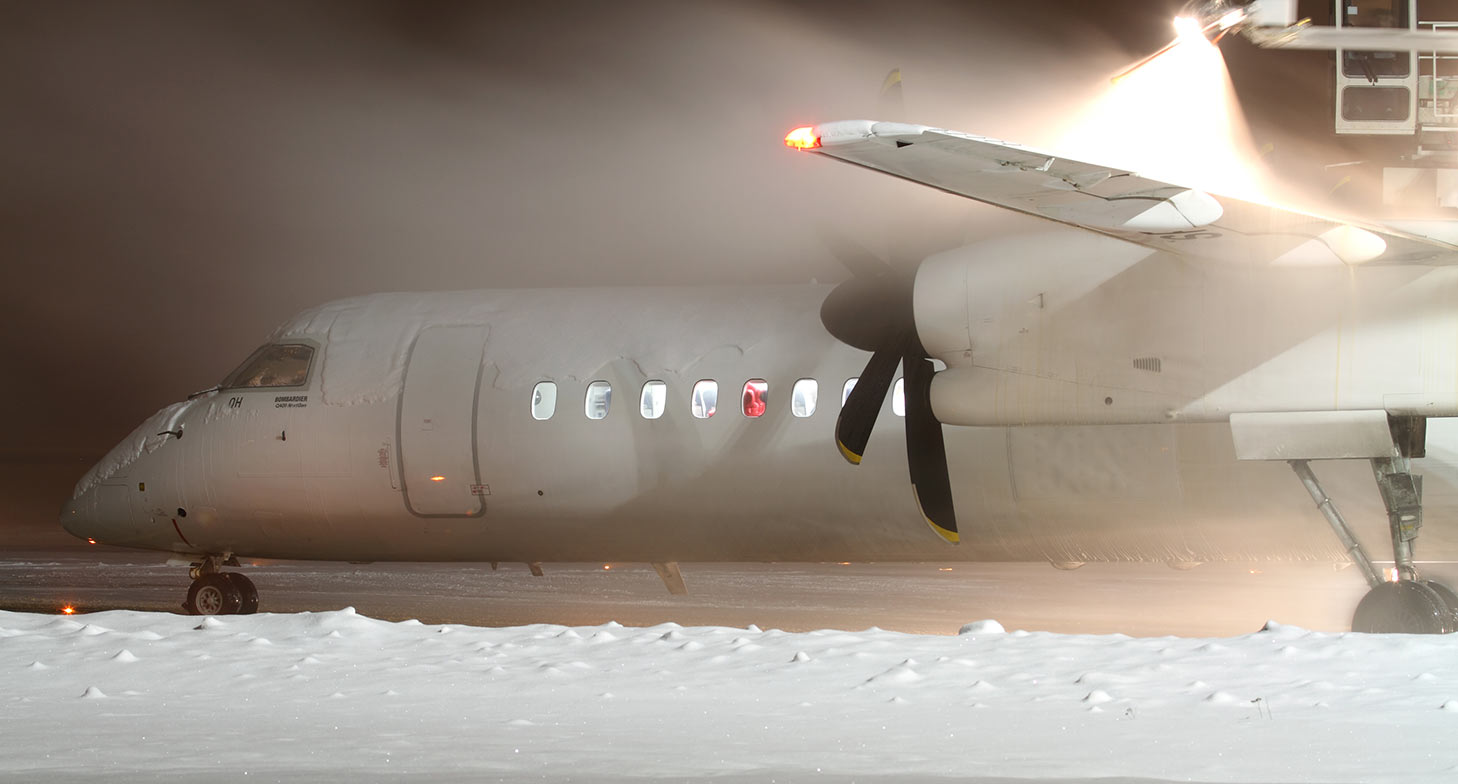 January 18, 2019 | Maintenance, Mechanics | 3 min read
An APU is designed to compress air, not liquid. If de-icing fluid gets inside by accident, it could adversely impact performance. Here’s how you can stop that from happening.

1. WHERE IS THE APU INLET LOCATED?

Due to the nature of de-icing operations, fluid can get into the auxiliary power unit (APU) via its inlet. This might happen because fluid is sprayed directly on the inlet, or it could be runoff from fluid sprayed nearby. In either case, when the APU’s turbomachinery tries to compress liquid instead of air, the stress may cause damage such as buckling or breaking an impeller blade.

How likely this is depends on where the inlet is located, as P&WC’s JS Lesieur, Customer Support Engineer, explains.

The probability of de-icing fluid ingestion is highest when the inlet is found on top of the aircraft, near the tail. It’s imperative that you take precautions whenever you de-ice an aircraft with an APU, but extra care is required with these aircraft.
JS Lesieur, Customer Support Engineer
During high-flow, high-pressure de-icing operations, it only takes a couple of seconds of spray near the inlet to cause ingestion. The likelihood is higher when using Type I de-icing fluid, JS adds, since it is less thick than the other commonly used fluid, Type IV, and sprayed at a higher flow rate and pressure.

2. ARE YOU TURNING OFF THE APU?

When the APU is running, it’s constantly drawing in air through the inlet. If de-icing fluid is sprayed in the vicinity, it might get sucked in too. For that reason, the APU should be turned off whenever possible while de-icing is under way.
JS Lesieur, Customer Support Engineer
Turning off the APU will allow the fluid to drip through the drain rather than being ingested. Once de-icing is complete, it is important to wait a few seconds before turning the APU back on, to ensure all the fluid has drained away.

“If an operator does have to run the APU during de-icing, they should ensure the bleed is turned off. Otherwise, if fluid is ingested, it could lead to smoke or an unpleasant odour in the cabin when the airframe circulates hot compressed air from the APU,” adds JS.

3. HAVE DE-ICING PERSONNEL BEEN TRAINED?

De-icing operations are handled by a third-party operator who typically performs this task for all planes at an airport. Given the differences in aircraft makes and models, it’s a good idea to alert the de-icing operator’s personnel about the location of the inlet on aircraft and the risks associated with fluid ingestion by the APU.

To make the de-icing crew’s work easier, there should also be a placard affixed to the aircraft exterior near the inlet identifying its location and warning about spraying de-icing fluid there.

4. ARE YOU BEING PROACTIVE ABOUT PREVENTION?

When it comes to de-icing fluid and APUs, an ounce of prevention is worth a pound of cure. If fluid does get inside, there are two possible scenarios.

Scenario 1: Significant quantities of fluid are ingested, resulting in an immediate APU shutdown. It will have to be inspected, and possibly repaired or replaced.

Scenario 2: Smaller quantities of fluid are ingested. The APU remains operational but deteriorates over time due to comparatively minor damage.
Sometimes the effects of de-icing fluid may not be apparent right away. The APU will keep running, but with damage that will reduce its durability and performance in the long term, such as a broken impeller tip.
JS Lesieur, Customer Support Engineer
For aircraft configurations that have an APU gauge in the cockpit, the presence of de-icing fluid may be signalled by changes in the readings. Since the fluid is essentially alcohol and will burn up inside the APU, there might be a temporary increase in exhaust gas temperature and turbine speed.

Since it is difficult to know for certain whether de-icing fluid has gotten inside the APU and the damage it causes can lead to higher maintenance costs and reduced life on wing, prevention is really the most effective approach.

“Taking the time to follow these best practices can make all the difference in sustaining the use and value of your APU over the long term,” concludes JS.