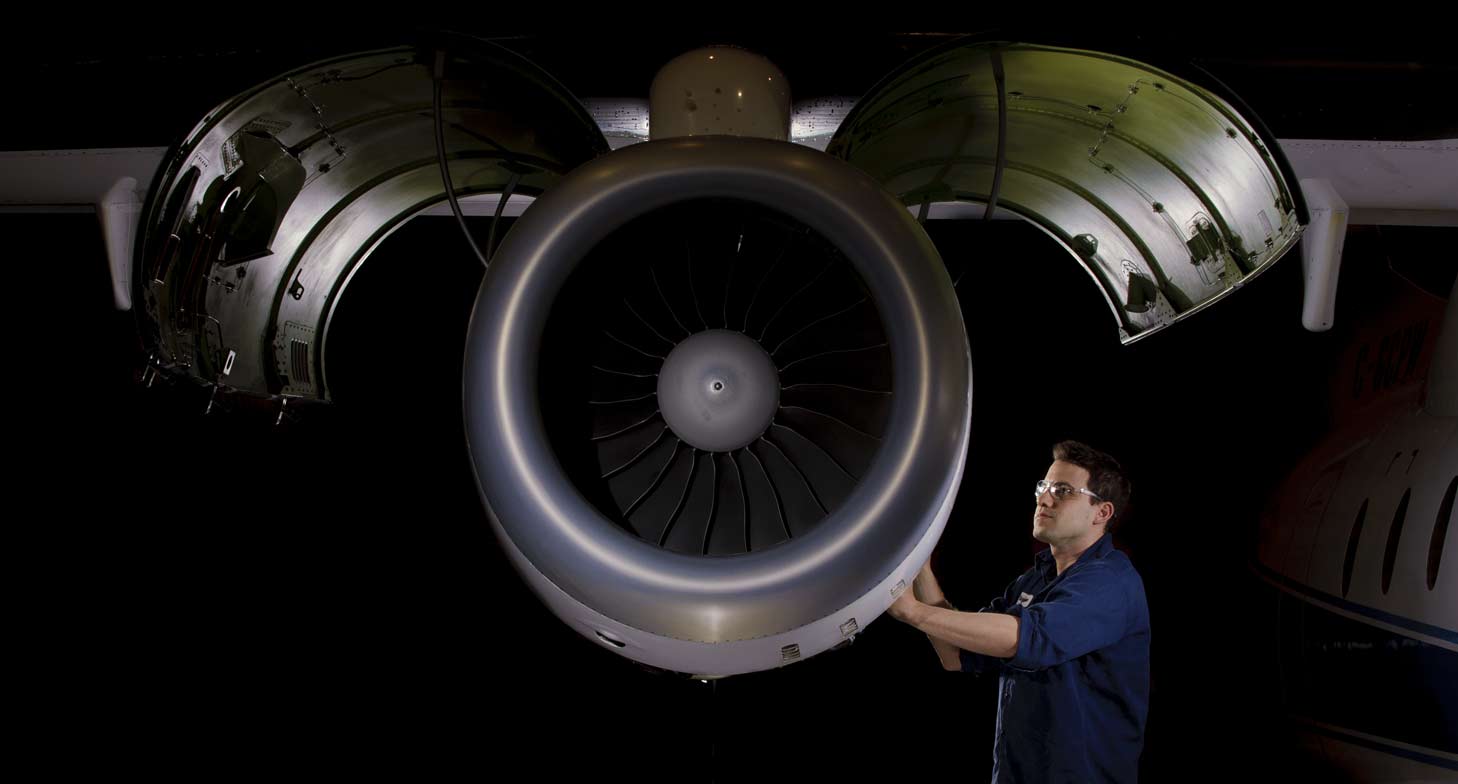 A typical turbofan engine has a set of titanium blades dovetailed into a titanium hub. These blades should fit tightly into place when the engine is running. When they’re not able to lock into a balanced position, however, vibration can result. This most often happens because the blades are rotated by the wind while the aircraft is sitting on the ground and not in use.. Known as windmilling, this phenomenon “can cause the fan to turn, but not fast enough to lock the blades in place, which means they shift back and forth slightly in their dovetail,” explains Francis de Gruchy, PW300 Customer Engineer.

The friction between the blades and the hub generates microscopic titanium dust particles, which are not a danger to the engine but over time may prevent fan blades from locking into their optimal position.
FRANCIS DE GRUCHY, PW300 CUSTOMER ENGINEER
The simplest way to prevent windmilling is to protect the engines with inlet and outlet covers if the aircraft will be parked outside and not in use for any length of time. This has the added benefit of preventing birds from building nests inside and accumulation of ice and snow.

For some operators, getting airborne quickly is a priority—which means they prefer to keep their engines uncovered at all times. In that case, Francis recommends performing fan blade maintenance at a set interval to prevent vibrations from developing over time.

This routine procedure involves removing the blades one by one, cleaning them, lubricating the fan blade pockets with paste, then re-attaching them.

If you’re covering your engines during downtime, it’s unlikely that you’ll ever need to do fan blade pocket lubrication. But if you’re not covering them, then it should be part of your routine maintenance activities
FRANCIS DE GRUCHY, PW300 CUSTOMER ENGINEER
The interval may be determined at the operator’s discretion. It could be every 600 or 800 hours of flight time, or whenever vibrations start to become stronger. Detailed instructions can be found in the engine maintenance manual.

3. CONSIDER FOD AND OTHER POSSIBLE CAUSES

Fans are balanced in the factory when everything is clean and the blades can lock into their natural position. But in normal operating environments, vibrations can sometimes develop. While a dirty dovetail due to fan blade friction is the most likely cause, especially if vibrations increase gradually over time but vary from flight to flight, there are other possibilities.

An abrupt jump in vibration levels could be the result of foreign object damage (FOD), such as a bird strike inside the engine. Incidents like these can knock the fan assembly out of balance by dislodging trim weights, even though there is no physical damage visible.

Our rule of thumb when troubleshooting is: try the simplest, most obvious options first. If vibrations are slowly building up over time for several months, we would try fan blade maintenance first—if that doesn’t work, then we’ll do a vibration survey.
FRANCIS DE GRUCHY, PW300 CUSTOMER ENGINEER
A vibration survey—done by hooking up a vibration analyzer to the vibration connector and running the engine—will identity whether and where trim weights need to be installed to re-balance the assembly. It is a standard piece of equipment owned by most fixed-base operators and OEMs.

Vibrations may also be caused by a malfunctioning accessory, such as a starter or generator. In this case, the accessory will need to be replaced. To help identify which accessory it is, Francis suggests switching a given accessory between the left and right engines then seeing whether the vibration changes from one engine to the other along with it.

Finally, some vibration alerts issued by the crew alert system turn out to be false alarms due to a malfunction in the aircraft’s vibration sensing system. “The way to differentiate this is to check whether the pilot senses the vibration through the control stick or rudder pedals, or whether passengers can hear or feel it in the cabin,” notes Francis.

If a customer reports a vibration alert, the first thing we ask is: do you feel or hear the vibration in the cockpit or cabin? If they can, we know it’s a true vibration. If they can’t, we know to troubleshoot the vibration analysis system.
FRANCIS DE GRUCHY, PW300 CUSTOMER ENGINEER
P&WC engines are generally certified to operate safely at a vibration level of up to 1 inch per second (IPS). But depending on the aircraft’s design and the individual passenger or crew member’s tolerance, vibrations could start to become noticeable when they exceed 0.30 or 0.35 IPS.