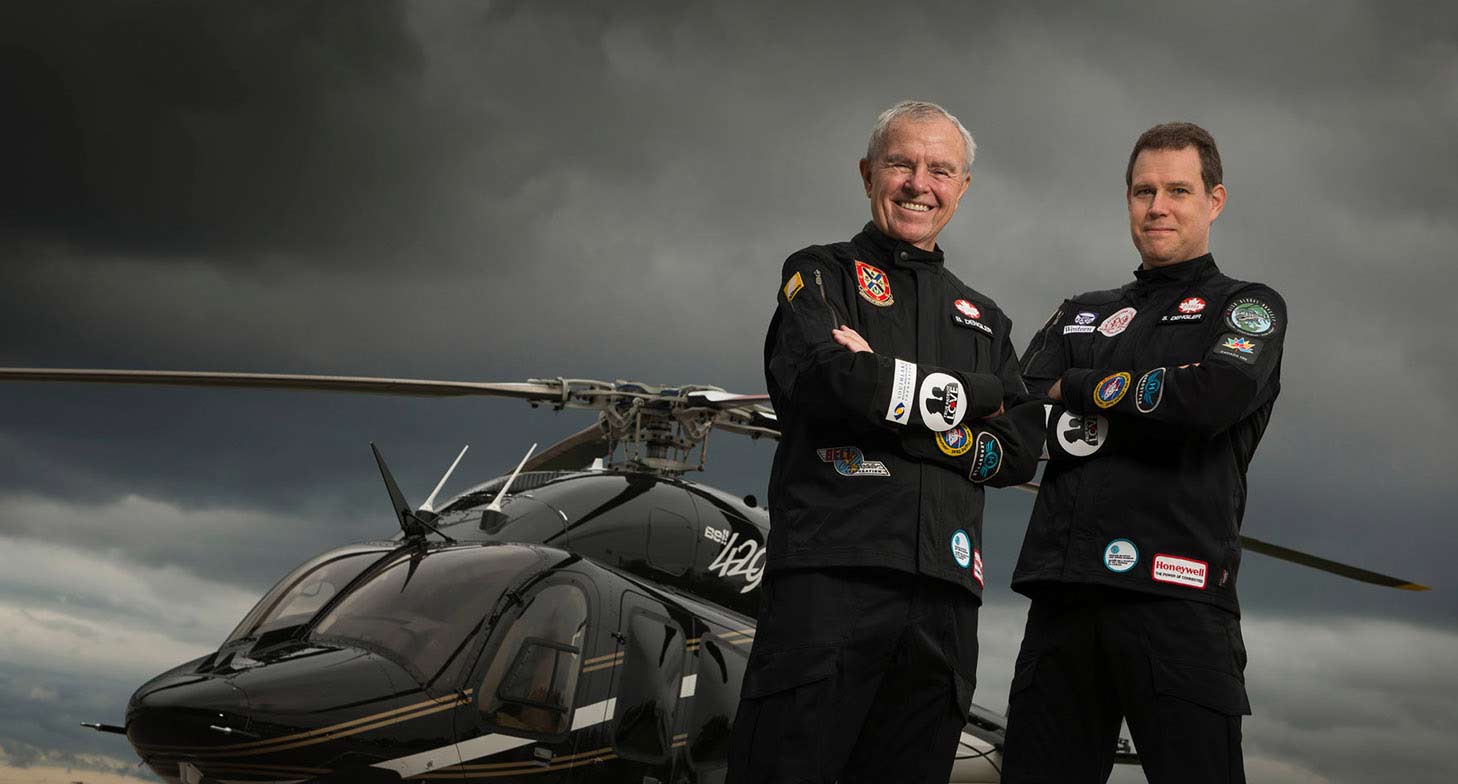 September 25, 2017 | Customers, Diagnostics, Passion | 3 min read
Two successful business men, one dream: fly a Bell 429 GlobalRanger with PW207D1 engines around the world. This summer, father-son team, Bob and Steven Dengler, made their dream a reality.
Bob and Steven's 38,000-kilometre trip made them not only the first Canadians to circumnavigate the globe in a helicopter, but the first father-son team to complete the journey. Dubbed the C150 Global Odyssey (C150GO), their adventure honored Canada’s 150th anniversary and raised funds for charity.

The journey, which began after a pit stop for a ceremony at the Canadian Aviation and Space Museum in the nation's capital, Ottawa, on July 1st—Canada’s 150th birthday—included stops at over 100 airports in 14 countries. Despite delays due to inclement weather, the Denglers' journey was a success. After 33 days of adventure, the father-son team reached their home base in Vaughn, Ontario on August 15.

C150GO was truly a made-in-Canada affair: The crew—including Bob, Steven and co-pilot Rob “Dugal” MacDuff—were all Canadians, and so was most of the aviation technology.

“C150GO is a celebration of Canadian aviation and a showcase for Canadian technology, from the airframe to the engines to the satellite communications, as we fly it around the world,” Steven told Airtime when we caught up with him in Reykjavik, Iceland, two weeks into the epic voyage.

The duo's journey attracted a lot of attention from Canadian media, with publications like the Toronto Star covering C150GO.

At first, flying around the world by helicopter was little more than a “wild, crazy idea", recalls Steven. Both he and his father are long-time aviation enthusiasts, and Bob, who first proposed the idea, owns a Bell 429 helicopter. As they entertained the idea, the two men kept busy running their own highly successful companies, XE and Dynatec Mining, so the epic flight remained a pipe dream.

But in 2015, the two entrepreneurs had sold off their respective businesses and found themselves with the time and the resources plan the adventure. They set their sights on taking off in the summer of 2017.

"It turned out that it was also the 150th anniversary of Canadian Confederation, so we said, ‘Perfect—we’ll make this a celebration of Canadian history and innovation,’” Steven explains 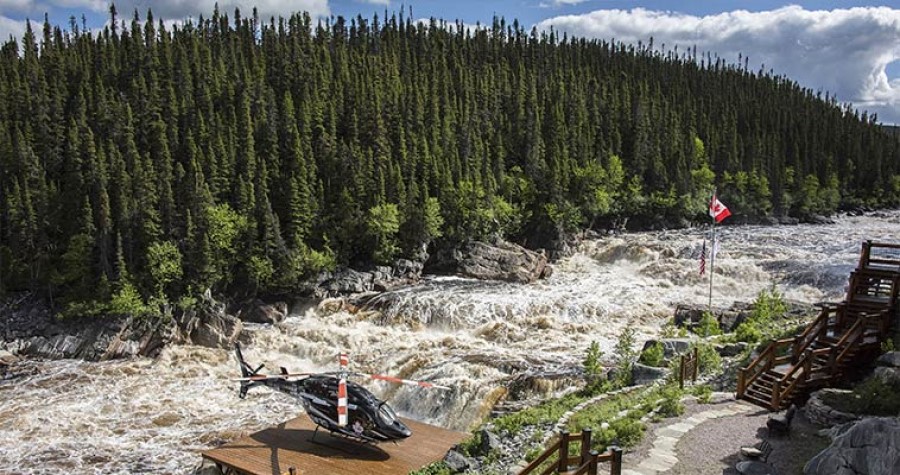 ABSOLUTE CONFIDENCE IN THE PW207D1-POWERED BELL 429

Planning the trip involved 18 months of hard work, with many complex factors to consider, like scheduling and logistics. But one decision couldn’t have been simpler: they were flying Bob’s PW207D1-powered Bell 429. 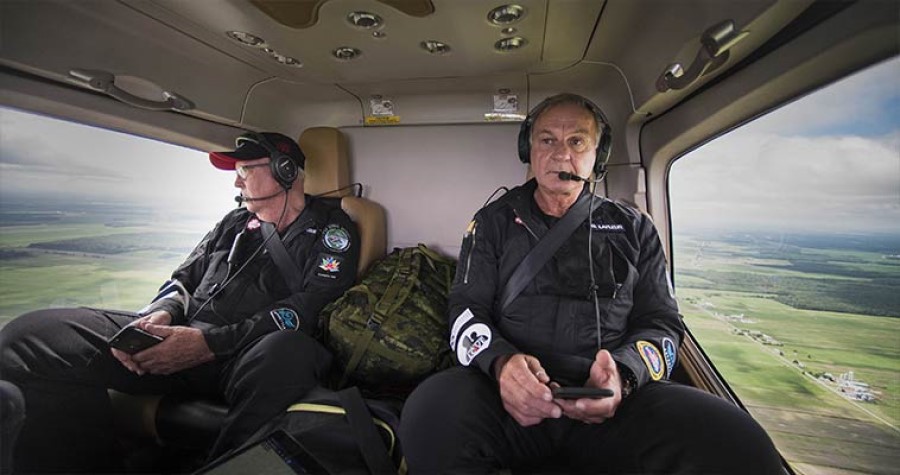 The team inside the helicopter during a flight © Peter Bregg 2017
The safety factor was paramount—especially since the helicopter would be flying over vast stretches of freezing ocean and undeveloped Arctic regions, where airports are few and far between. Using the same engines chosen by the Canadian Coast Guard made a lot of sense.
If we didn’t have absolute confidence in the PW207D1 engines in this aircraft, we wouldn’t be flying it over 750 kilometers of North Atlantic water. It’s that simple. We’re not flying anything over that unless we’re absolutely 100% sure there’s nothing to worry about.
STEVEN DENGLER, CO-PILOT, C150GO

PILOTS WITH A CAUSE 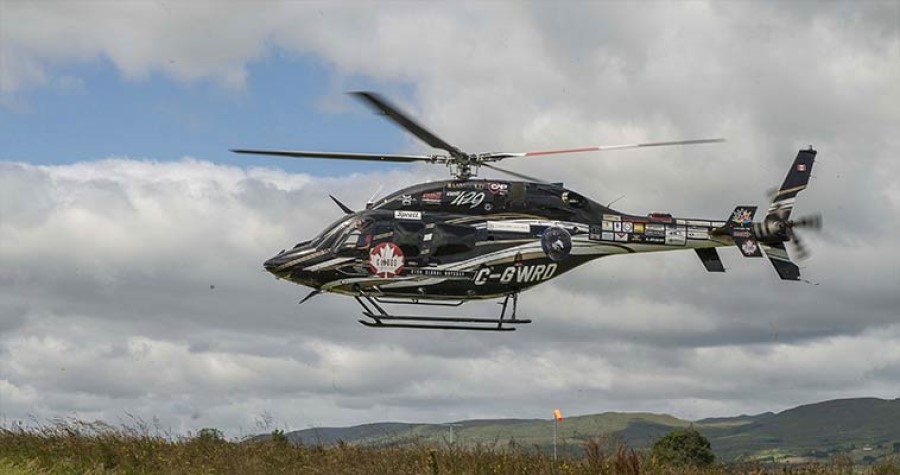 C150GO wasn’t just about the adventure. The Denglers saw the journey as an opportunity to share a great Canadian story with people around the world, and to give back to their community.

On top of documenting their feat online, the father-son team raised funds for two charities: the Southlake Regional Health Centre Foundation in Alberta and the True Patriot Love Foundation.

For Steven, the opportunity to give back was immensely gratifying. “It’s been getting an incredible reception. People are genuinely interested. It’s our great fortune to be doing what we’re doing now, and we’re really making an effort to make it worthwhile by sharing this Canadian story,” he says.