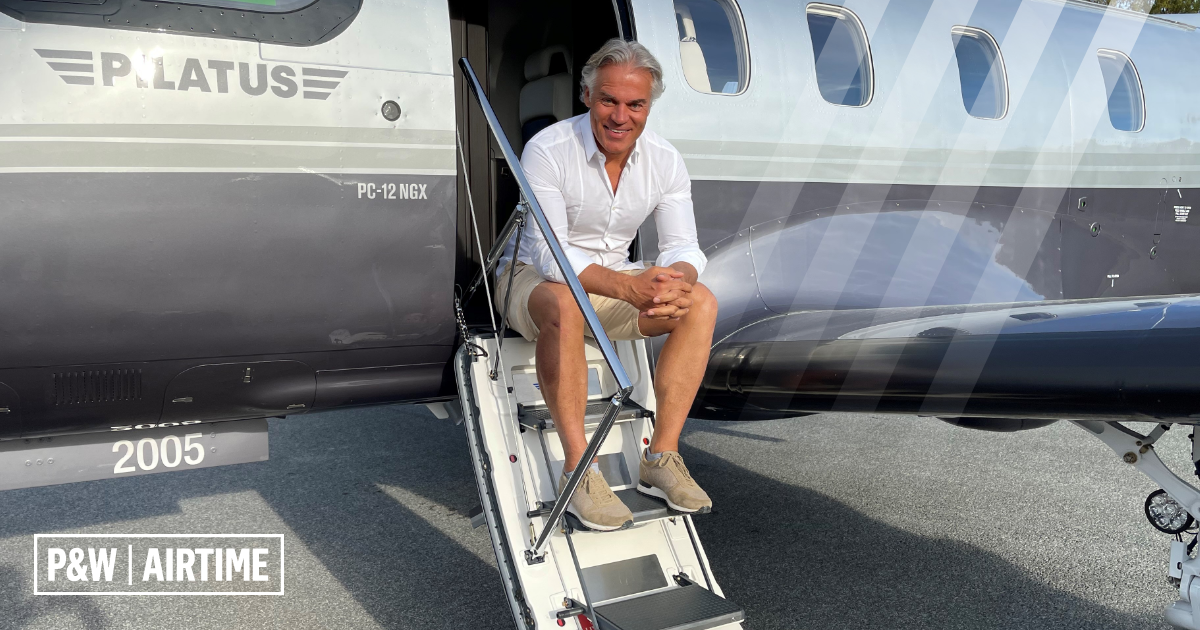 May 17, 2021 | Customers, Passion, Performance, Turboprops | 3 min read
Airtime spoke with Dr. Ulrich Byszio, the first European customer to receive a PT6E-67XP-powered Pilatus PC-12 NGX turboprop, about why he loves the aircraft—and his experience with the ESP™ Platinum program.

Finding the perfect aircraft for a busy owner-pilot

Dr. Ulrich Byszio is a man who loves new challenges and setting ambitious personal goals. In his early 50s, the former pro rugby player and successful entrepreneur, who now works in the private equity field, decided to tick an item off his bucket list: learning to fly.

After earning his pilot’s license, he first bought a small light jet. When he decided to upgrade a few years ago, he considered the Pilatus PC-12, but he was hesitant to go with a single-engine aircraft and felt it wasn’t the right fit.

“I wanted a turnkey aircraft with FADEC [full authority digital engine control], so I wouldn’t have to worry as an inexperienced pilot,” he explains. “Pilatus suggested that I wait a bit longer, because they had something else coming that would be good for me.”

In the fall of 2019, the airframer unveiled its state-of-the-art PC-12 NGX turboprop, powered by the new Pratt & Whitney PT6 E-Series™ engine, at the NBAA-BACE airshow in Las Vegas. The PT6 E-Series engine is the first dual-channel integrated electronic propeller and engine control system in general aviation. It allows for a more intuitive way of flying, from engine start to propeller and engine control.

The PC-12 NGX offered exactly the advanced performance and versatility that Dr. Byszio was seeking.  He placed his order, and in early 2020 became the first European customer to receive delivery of the new aircraft. A year later, he remains delighted with his purchase—so much so that he has flown it twice as often as he initially expected.

I fly a lot, mostly for pleasure and sometimes for business. The PC-12 NGX gives me the freedom to go wherever I want to. I’ve flown 400 hours since I bought the plane and haven’t had any problems.
Owner-pilot Dr. Ulrich Byszio

When he ordered the aircraft, Dr. Byszio also enrolled in Pratt & Whitney’s Eagle Service™ Plan (ESP™) Platinum program for PT6 E-Series operators. He did so for three reasons: to give him dedicated level of support from the Proactive Services team, to benefit from comprehensive maintenance coverage, and to protect the value of his investment.

As an enrolled customer, he benefits from a suite of digital engine services, including Pratt & Whitney’s Oil Analysis Technology, engine condition trend monitoring (ECTM) and dedicated support from the Proactive Services team.

If there is an issue, the Proactive Services’ reaction time is very quick. If some data seems irregular, it will likely be discovered before I take off.
Owner-pilot Dr. Ulrich Byszio

In fact, Dr. Byszio received a call from the Proactive Services team a couple of times after they noticed a slight irregularity in his flight data, due to the engine being in the beta range for longer than the recommended time.

The latter is a team of engineers and analysts who monitor customer data to optimize maintenance, provide recommendations and maximize availability. Rather than being checked after a maintenance event or annual inspection, the data is analyzed after every single flight.

Given that he’s a solo pilot who often flies over the unpredictable environment of the Swiss Alps, he appreciates this attention to detail and white-glove customer service approach. He doesn’t mince his words when talking about it: “As a single-engine pilot, I’d be stupid not to enroll in this service.”

The ESP™ Platinum plan gives me ease of mind, since I know that if something happens to the engine, I’ll be covered. I’m also thinking about the resale value of the aircraft. Without a maintenance program, its market value will be less.
Owner-pilot Dr. Ulrich Byszio

Additionally, the value of the aircraft is an area that P&W has been closely analyzing with the independent firm, Asset Insight, LLC. With today’s high ESP™ Platinum adoption rate, market valuations are behaving similarly to those of business jets. For the first time ever on a turboprop, a hull value deduction is taken when not on ESP™ Platinum.

Benefiting from engine dependability and ease of use

Given that he’s such a frequent flyer, reliability and ease of use were key factors in Dr. Byszio’s choice of the PC-12 NGX. He notes that the FADEC and digital auto-throttle control make the job much easier for a single pilot, greatly reducing the workload while also increasing safety.

“It’s almost as easy as driving a car. I use it for everything,” he says. He adds that from his home base in Frankfurt, the PC-12 NGX gets him to his destination faster than any commercial jet in Europe, including the option of landing at very small airports with grass runways.

When it comes to reliability, the PT6E-67XP model— Pratt & Whitney’s cutting-edge PT6 E-Series engine, which represents a major advance in the single-engine customer experience—is integral to the aircraft’s exceptional dispatch availability.

The PT6 E-Series™ is the evolution of an engine family that has flown millions of hours, which gives me more peace of mind than a completely new engine design. I’m fully confident it will fly me safely to my destination no matter the environmental conditions.
Owner-pilot Dr. Ulrich Byszio
For more on how we are evolving our ESP™ coverage to match our advances in our engine technology, read our earlier Airtime article, PT6 E-Series™ Engine Drives Step-Change in Customer Service.

Read more
How Fast™ Contributed to an Ambitious Transatlantic Flight